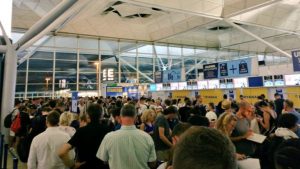 Passengers are experiencing long delays  and cancellations to and from Britain’s airports as more than 100 flights have been cancelled on the busiest day of the year for travellers due to extreme heat.

From the Heathrow Airport British Airways has cancelled at least 50 flights to thin out the schedule, add resilience and also due to knock-on delays from Thursday.

Several services to and from Berlin and Rome got cancelled, this included domestic links to and from Manchester, Newcastle, Edinburgh and Aberdeen.It was reported that a BA flight to San Francisco was running 24 hours late.

A spokesperson for British Airways said that their teams apologised to customers for the inconvenience and have been doing what they can to look after them, providing refreshment vouchers and hotel accommodation and as much information as they can on the delays or cancellations, which have been caused by thunderstorms following the extreme heat.

Austrian Airlines to Vienna, Alitalia to Rome and KLM to Amsterdam are also known to be affected. British Airways and easyJet, two main airlines at Gatwick have been struggling to recover from many long delays and cancellations on Thursday.

BA’s inbound flights from Verona, Naples, Salzburg, Malta and Dalaman were delayed overnight and are due to arrive early in the afternoon.

After the airline cancelled dozens of flights  many easyJet passengers were left in worse position while others waited to leave on Thursday night.

At around 9pm services on easyJet to Basel, Geneva and Hamburg were abandoned  because the aircraft would not have reached the Continental airports before the flight curfews came into effect.

Around 20 flights were cancelled to and from Gatwick on Friday morning. This included links to Tenerife, Rome and Venice.

Flights on easyJet from Luton, including to Geneva, Milan, Naples and Nice were cancelled.Airlinks from Faro, Inverness and Pisa also got cancelled.

In the domestic link Flybe has cancellation which included Edinburgh to Birmingham and Southampton to Manchester.

Meals and accommodation will be provided to airline passengers until they reach their destination which can be on a different airline.  They will not be entitled to receive cash compensation.

Thameslink commuter operator said that Network Rail have been unable to completely fix the damage to the overhead wires between London St Pancras International and St Albans, and they will continue to work on this on Friday night.

Passengers heading for Gatwick and London Airports will see reduced ability of Thameslink to run trains. Half of the running lines will remain unavailable.