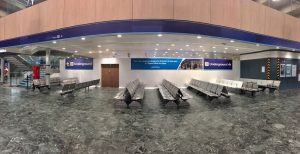 A new customer seating area has been created at Euston after the entrance to the London Underground was moved this weekend as part of ongoing improvements for passengers.

The Tube is now accessed at the front and centre of Euston station’s external piazza.

The outdoor access will improve passenger flow and means the Underground and Euston station can operate independently from each other.

Those interchanging from tube to main line trains will no longer have to weave their way through passengers waiting on the concourse in front of the arrival and departure boards.

Instead passengers will be directed to enter the Underground by exiting the main station building and turning left or right for a short walk to access the escalators down to the Tube.

The customer seating zone with 113 seats was created in the space freed up by the Underground entrance move.

Joe Hendry, station manager at London Euston, said: “The lack of seating at Euston has long been an issue for passengers and I’m really glad we’ve been able to make these improvements.

“Over recent months we’ve been working really hard to put passengers first and create more space in the station, and the new customer seating area could only be created by carefully reconfiguring the entrance to the Underground.

“The move outside means that during busy periods we’ll be able to better manage the flow of customers.”

Another change this weekend has also seen the closure of Boots the Chemist. The unit will be removed to improve access to platforms 12-16, with a smaller pharmacy returning for customers later in the year.

It comes after the successful removal of the Bodyshop and Paperchase units at Easter which has made a big difference to passenger flow around the station.

In recent weeks the Travel Information kiosk has also been removed with eight customer information pods now in place around the concourse instead.

Joe added: “It did feel a bit like the Crystal Maze at times for customers, so we’ve taken away all this clutter and made it easier for people to see from the concourse, all the way down to their platforms.

“We know that passengers value the retail at the station but over the years it has been built in the wrong place. In the longer term, we’re looking at where we can replace our retail offering but in better locations which don’t impede access to and from Euston’s platforms.”

At the beginning of 2019 the station’s taxi rank was also relocated to the very front of the station after spending decades underground.

The changes around Euston station are part of a wider programme of improvements to concourse and platform access, lighting and signage, and to prepare for Britain’s new high-speed railway, HS2.