1st National Seminar on Governance for Tourism kicks off in Brazil 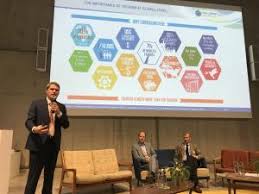 With the objective of promoting the good governance practices of Brazilian tourist municipalities and the implementation of tourism as a source of income and job creation, the 1st National Seminar on Governance for Tourism began on Thursday (July 11), in Capitólio (MG). The event runs till Saturday (July 13).

The event will be attended by the representatives of the Ministry of Tourism, in addition to more than 700 municipal managers, entrepreneurs of the Brazilian tourist trade, specialists and parliamentarians.

At the opening of the meeting, the national secretary of Interinstitutional Integration of the Ministry of Tourism, Bob Santos, spoke about the potential of Brazilian tourism and how to make the country a more competitive destination in the world market.

Infrastructure, international market opening, security, improving the business environment and the industry as a priority in the country’s strategic agenda are some of the main pillars to transform the Travel industry in Brazil. The secretary also presented the public policies, results and strategic goals of the Ministry of Tourism.

“In Brazil, we need to rethink tourism in a more current way that brings us closer to reality and allows us to define a strategy that will last for the next 15 or 20 years. In addition, we have all the necessary elements for postmodern tourism, where public and private forces go hand in hand, strengthening the industry as the driving force behind the economic agenda,” said Bob Santos.

Also on Thursday (July 11), the secretary of the Ministry of Tourism participated in the debate on governance in public policies for tourism, alongside the president of the Joint Parliamentary Front in Defense of Tourism, federal deputy Herculano Passos (MDB-SP) , and representatives of the Secretariat of Tourism of Minas Gerais and Clia Brasil (Brazilian Association of Sea Cruises).

Promoted by the National Confederation of Municipalities (CNM), in partnership with the Mining Association of Municipalities (AMM), the city hall of Capitólio and the Brazilian Service of Support to Micro and Small Enterprises (Sebrae), the event also hosts the Business Fair Tourist Destinations in Brazil – Minas Gerais Edition, where gastronomic tourist products – canastra cheese, cachaça and fish dishes – are displayed.

The contributions of the participants presented in the lectures will be part of a Charter. This document shall be submitted to the competent authorities.

For the president of the CNM, Glademir Aroldi, tourism represents one of the main conductors of sustainable development of a city, with the potential to leverage revenues and reduce the difficulties faced by municipal management.

“Of the more than 5,000 municipalities affiliated with the CNM in all states, 2,960 are participants in the Brazilian Tourism Map, 328 of which are tourist regions. Minas Gerais has 555 cities with a tourist vocation. Therefore, the strength of this representation and governance for tourism will be intensified in Capitólio,” the president said.

Since 2003, when Pasta was created, the Ministry of Tourism invested over R $ 500 million in tourist infrastructure in Minas Gerais. In total, there are 1841 works, of which 1,557 have already been completed. The state also won, together with the MTur, approval of the Seal + Tourism for nine municipalities and three projects of the private initiative. With MTur certification, the proposals are given priority in the processing of financing with the development banks, contemplating projects to improve the tourist infrastructure of the region.