More than 2000 tourists in Hainan are encouraging speed-walking 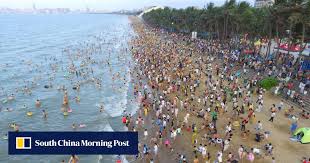 About 2,000 people participated in a one-time fitness initiative to popularize speed-walking in the Lingshui County on the southern coast of Hainan, news portal reported.

The event highlighted the 70th anniversary and the national Fitness Day of China, organized in the country since 2009. The event signified to endorse a healthy way of life on the island along with establishing a popular zone for sports on Hainan.

“Speedwalking is one of the promising areas of fitness, a world-famous form of physical activity in aerobics. It has a positive effect not only on health, but on the environment as well,” said Chen Shihong, head of the local department for tourism, culture and sports.

As per the official, recreational walking in Linsghui is particularly well-liked, since the routes stretch all through the most beautiful areas of the island. “Speedwalking should promote active fitness and serve as an incentive for a healthy lifestyle for all residents of our country,” said Chen Shihong.

Feng Jin as the deputy head of the department mentioned that the authorities of the autonomous county focus on speedwalking and make it a symbol of Lingshui and add to the fame of its natural landscapes. According to her, because of this, the region will pull tourists in huge numbers, boosting consumption, the development of restaurant and hotel business.

As per the plan of the Chinese authorities, Hainan should turn out to be a leading region for the development of tourism and sports, a world-famous place for fitness recreation by 2025. It is estimated that by this time the volume of the fitness industry and related services on the island will exceed 20 billion yuan (more than $ 2.8 billion).