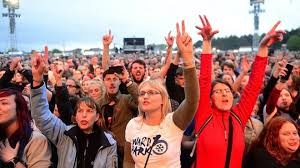 It was compiled by UK Music, the industry body of the British music industry.

The statistics comprise money spent on tickets, merchandise and accommodation along with organizers spending on managing an event.

The report explained that last year the total contribution of the music industry to the economy of the UK was £5.2bn, in general.

The financial analysis for the ‘Music by Numbers 2019’ report was conducted together with Oxford Economics.

Their recent report with data for 2018, which has just been made to the public, explained that the UK music industry grew in every sector.

This comprises revenues generated from live music, employment in the industry, music tourism, retail and exports.

That is regardless of the challenges including “an increasing complex online market, where platforms are often incentivized to avoid fairly rewarding creators,” along with concerns about the effect of Brexit and increasing business rates.

The report mentioned that in 2018, about 294,000 music lovers had visited Northern Ireland to go to a festival, show or gig.

If someone in Northern Ireland travelled around 35 miles to participate in a concert, gig or festival they were classified as a domestic tourist.