In 2019, Azerbaijan experienced a record high in tourist numbers 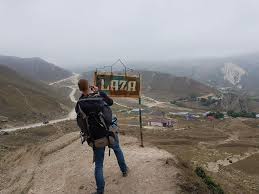 The national tourism agency of Azerbaijan has explained that last year was a record year in terms of inbound tourism, with slightly more than three million visits. The earlier record reached 2.85 million in 2018.

Approximately, between January and December, about 3.17 million travelers came to the Caspian Sea coastal country. This was an 11.4 percent rise from the year before, as per the data collected from the website of the agency.

At the same time, in 2019, Azerbaijan witnessed a growth in tourists from the European Union with 224,000 travelers. This was an increase of almost 15 percent from the year before. Tourists mainly came from the United Kingdom, Germany, Italy and France to visit what is South Caucasus’ largest and wealthiest country.

In 2019, the rush in tourists had overlapped with a series of events, particularly related to sports.

Among the major events of the country, the Formula One car race was arranged in the city center of Baku, known for its lineup of musical performances like Jessie Jay and Cardi B this year. Besides, the city greeted the final game of the UEFA Europa League for the first time in its history. Thousands of football (soccer) aficionados across the globe assembled in the capital city of Azerbaijan to witness the game between the two English giants from London, Arsenal and Chelsea.

In the meantime, the boom in tourist in 2019 generated strong sales for local industries as visitors spent almost $2.53 billion in the last 12 months. President of Azerbaijan, Ilham Aliyev, believes that this will certainly impact the country’s macroeconomic stability.

‘‘We will keep on developing tourism in the country,’’ President Aliyev said on Monday while touching on the achievements of last year, according to a report by Interfax Azerbaijan.

Officials from the tourism agency of the country had forecasted that the number of visitors to Azerbaijan will reach about four million in 2020, meaning hotels and restaurants can anticipate a record year. To attract greater number of tourists, authorities have by now introduced a series of efforts like a tourist police service that is hoped to provide exclusively to the visitors needs and multiple-entry, short-term tourist e-visas, which can be acquired quickly via online.