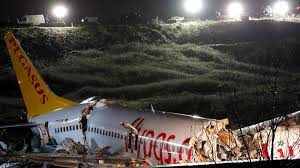 Officials reported that a passenger plane, Pegasus Airlines, skidded off the runway at an airport in Istanbul and broken into three parts. It killed three people and injured more than 170.

In heavy tailwinds and rain the Boeing 737 was trying to land and the airport was closed and flights diverted after the accident.

The airline’s records stated that there were 22 foreign passengers from 12 other countries and majority of them were Turkish. It is believed that a small number of children were on board.

Ali Yerlikaya, Istanbul  Governor said that unfortunately thePegasus Airlines plane could not hold on the runway due to poor weather conditions and skidded for around 50-60m.

The plane fell between 30 and 40 metres off the end of the runway.

Sabiha Gokcen Airport has reopened  and prosecutors have opened an investigation into the crash.

On the Pegasus Airlines website a statement was issued earlier that the noted flight PC 2193 on a TC-IZK- registered aircraft which was flying from Izmir Adnan Menderes Airport which is also in Turkey experienced a runway excursion after landing at Istanbul Sabiha Gokcen Airport.