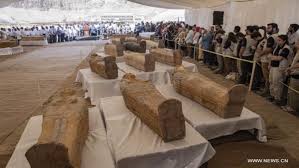 He said, the cachette includes a collection of 30 colourful wooden sarcophaguses, noting that, the coffins are in a good condition of preservation.

“The coffins were not inside a tomb. They were buried under the cliff of al-Assassif mountain,” al-Anany said.

The minister said, the coffins were found stacked in two layers in al-Assassif on the west bank of Luxor.

“It is an important discovery and the excavation works did not end yet,” the minister said, adding that, the coffins will be moved to the Grand Egyptian Museum, which will open its doors by the end of 2020.

Meanwhile, Secretary General of Egypt’s Supreme Council of Antiquities, Mostafa Waziri, said, the coffins date back to the 22nd Dynasty of the 10th century B.C.

Waziri said, it is the first large human sarcophagus cachette to be fully discovered, since the end of the 19th century.

The inscriptions on the sides of the coffins represent various subjects, including offerings and scenes of different gods, as well as, scenes from the Book of the Dead, he said.

“This cachette comes as a witness to a period of historical instability, during which the theft of tombs spread notably,” he said.

Renowned Egyptian Egyptologist, Zahi Hawass said, he is “so proud that this cachette was discovered by Egyptian archaeologists because the other ones were unearthed by foreigners.”