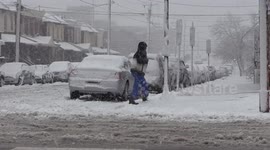 Amid a huge snow storm thousands of flights in the US have been cancelled and up to 60 million people have been effected by the extreme  weather in the North East.

It was reported that many households from Philadelphia to New York lost electricity.
Forecasters have predicted two feet of snow fall in the region and British tourists travelling to the US over the next few days will be facing disruptions.

The wet, heavy snow is making its ways up the coast , the storm called the nor’easter has brought thunder and lightning.

So far more than 1,900 flights have been cancelled in the New York city area and around 3,000 internal and international flights cancelled in total across the region.
Due to the cancellation of many train and bus services the commuters had to struggle to get to the work places.

Around 120,000 outages and about 6,000 of which were left over from another major storm last week was reported by PECO, Pennsylvania’s largest electric firm.

Cape God could face gusts up to 60mph, 45mph at the Jersey shore and 30mph around suburban Philadelphia.

Under the weight of the wet show power lines and tree branches across the region had sagged.