35th IATO Convention to be hosted in Kolkata, West Bengal 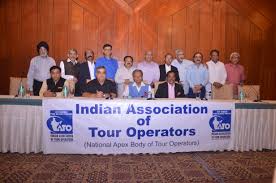 After a gap of 17 years the Indian Association of Tour Operators (IATO) will be hosting their 35th IATO Convention in Kolkata,West Bengal between September 12 and 15.

It will be showcasing the new face and identity of Kolkata as a hub city and West Bengal Tourism will provide a glimpse of the preparations towards the biggest tourism property Durga Puja to the delegates of the Convention.

Atri Bhattacharya, Principal Secretary – Tourism, Government of West Bengal said during the launch the launch of the logo and theme of the IATO convention in Delhi that the main aim of the State Tourism is to bring forward the new face of the city to the tourism trade in India.

Over the last 10 years the city has changed remarkably and is much cleaner today with less traffic snarls as compared to the other metro cities in the country.

The economic potential of the tourism sector was well understood and it will create a goodwill of the destination.

The government under the Chief Minister, Mamata Banerjee envisions in preserving the cultural identity of the destination  and it will be highlighted through a slew of festivals. So, Bhattacharya urged the tourism trade in the country to look beyond Kolkata.

Durga Puja sees participation of an estimated 13 million people across 10 days and the government has charted out many cultural events and festivals till Holi across different places in the state to promote the culture an heritage of the State,

A nice tourism circuit has been created around wildlife and adventure in the South Western part of the state which has rivers,mounatisn and forests. There is a heritage circuit around Malda and Murshidabad.

‘ Ocean to the Sky’ a new theme will be encapsulating the natural advantages of the State and its tourism opportunities,

The government is also in the process of introducing two more high capacity vessel to support the existing four vessels. The new vessels will be deployed in places like Mukutmanipur that would spread the benefit of cruise tourism to newer destinations.

The theme of the 35th annual convention is ‘Is Tourism Thriving – Challenges and Opportunities’.