4,000+ flights cancelled in US over the weekend due to snow and thunderstorms 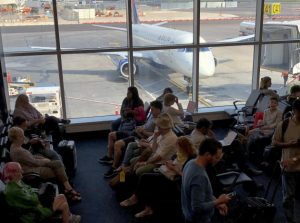 Heavy snow and thunderstorms impacted the operations at major airports across U.S. leading to the cancellation of more than 4,000 flights over the weekend. Storms brought more than 5.3 inches of snow at O’Hare International Airport in Chicago, causing more than 1,000 flight cancellations with an average delay of 44 minutes for all flights as per the Chicago Department of Aviation.

More than 38,500 flights have been delayed since Saturday, and over 4,500 have been cancelled as per the flight tracking site Flightaware.com. Major airports in cities like Chicago and Dallas were impacted and some travellers were stranded overnight.

Heavy rainfall and flash flooding have exited the Northeast later Monday, but threats of ‘severe’ thunderstorms and some flash flooding will continue to spread across the eastern U.S. through Friday, as per the National Weather Service.

Another 189 flights were cancelled Monday morning at O’Hare, while travellers stuck overnight Sunday were still struggling to schedule their trips.

After heavy snowstorms, Chicago temperatures are increasing and are expected to reach the mid-50s on Monday and the mid-to-high 60s by Tuesday as per the forecast models.