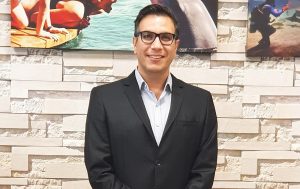 Israel Embassy has appointed new director of tourism in Philippines , Sammy Yahia which will be effective this June.

Yahia will be responsible for leading the tourism board’s initiatives in the Philippines and oversee the development of the policies and strategies.

Yahia headed as the Director of Marketing and Communications for Israel Ministry of Tourism from 2012 to May 2019 prior to his appointment to India and the Philippines.

For his valuable contributions during his tenure he was awarded the “Employee of the Year-Civil Service Commission and a certificate of appreciation from the Minister of Tourism and the Director General.

He holds an MBA in Marketing and Communication from the University of Derby and completed his BA in Social Sciences, Sociology and Anthropology from the Hebrew University of Jerusalem.

Yahia has an extensive and holistic experience in tourism marketing, strategic government relations and investment facilitation. He will seamlessly facilitate effective marketing strategies for the destination in Philippines and maximize the opportunity to achieve continued growth in tourism arrivals from Philippines.

Yahia felt delighted on the new appointment and was keen to take on this new position and look forward to working closely with various partners in the Philippines by building on existing partnerships alongside initiating new ones.

He said that the Philippines has a rich heritage, culture and history and is an exciting market for him to take charge of. He could foresee many opportunities to push boundaries and reinvent the ever evolving Filipino traveler influenced by globalization.

In the last couple of years till present the arrivals from Phillippines have amassed expectations and his strategy was to lure travellers to Isreal. The office will be working towards increasing connectivity between the Philippines and Israel while having a direct flight was their top priority.