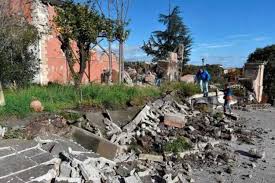 LABUHA, INDONESIA: At least two people were killed and thousands forced to flee their homes after a major 7.3-magnitude earthquake hit the remote Maluku islands in eastern Indonesia, an official stated Monday.

According to the US Geological Survey, the shallow quake struck about 165 kilometres (100 miles) south of the town of Ternate in North Maluku province Sunday evening.

In the sparsely populated South Halmahera district, the closest area to the epicentre, around 160 houses collapsed or were damaged when the earthquake struck.

Two woman died after being hit by debris, officials said.

The evacuees are staying in several schools and government buildings.

Local disaster agency official Ihsan Subur said most people were still traumatised and refused to return home for fear of another earthquake or a possible tsunami.

Indonesia’s weather agency said at least 65 aftershocks have been recorded between the initial quake and Monday morning.

Government officials have started to distribute food and other relief supplies for the evacuees.

North Maluku province was also hit by a 6.9-magnitude tremor last week but no extensive damage or casualties were reported.

Indonesia experiences frequent seismic and volcanic activity due to its position on the Pacific “Ring of Fire”, where tectonic plates collide.