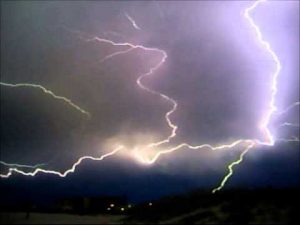 Eight people were injured when Clearwater Beach was hit by lightning on Sunday afternoon. Five of the eight were taken to the area hospitals. A man in his 40’s, was struck directly and suffered cardiac arrest, as per city of Clearwater news release. He’s currently in critical condition. One who was taken to Tampa General Hospital is being treated for burns. The other three chose not to go to the hospital because they felt only a mild tingling. They were treated at the scene.

Four, including the man who was directly struck, went to Morton Plant Hospital. The fifth person was taken to Tampa General Hospital.

The injured were on the beach at the time of the strike, near Frenchy’s Rockaway Grill.

Newland and his team of first responders was aided by a group of bystanders who rushed into the storm to bring the victims into Frenchy’s — and out of harm’s way.

Bystanders performed CPR on the man who was directly hit, before first responders arrived.

The lightning struck at about 12:40 p.m., ten minutes after beach lifeguards left their stations because of the bad weather as per the Clearwater release.