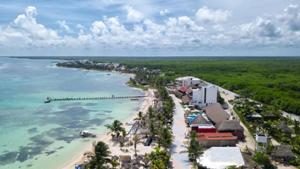 During the rest of August, the most important destination in the south of Quintana Roo, Mahahual, awaits the arrival of 99 thousand international tourists aboard 30 floating hotels that could leave an economic spill or 150.4 million pesos.

According to the August arrival log of the company Promociones Turísticas Mahahual S.A. from C.V., the arrival of 30 cruise ships is expected in the Costa Maya port, with a toal of 99 thousand passengers, who will have the opportunity to get off the ship and enjoy the natural wonders.

The world’s largest cruise ship, the Symphony of the Seas, from the Royal Caribbean Cruise, is scheduled to arrive twice this month bringing a maximum of 13,360 passengers.

According to the State Secretariat of Tourism (Sedetur) each cruise ship passenger leaves an average spill of $ 1,520 pesos, (67 U.S. dollars), in food & drink consumption in restaurants, water sports services, or purchase of handicrafts, which represents an economic spill of over 150 million pesos during this period of time, an important figure for Mahahual.

The international cruise ship “Breakaway” of the Norwegian Cruises shipping company, will also be arriving more than once to the Mahahual pier.

The economic spill of this month is only 3.12 million pesos less than in July, which was estimated at 153. 6 million pesos approximately.

Obed Durón Gómez, mayor of Mahahual explained that the arrival of cruise ships is constant, however the accumulation of sargassum on the beaches and especially the foul smell in the beach area is what is driving the foreign tourists away, and so the state and federal governments need to do something to solve this difficult situation that is significantly affecting the tourism sector in Mahahual.