Scotland’s Railway Gets Ready for Autumn 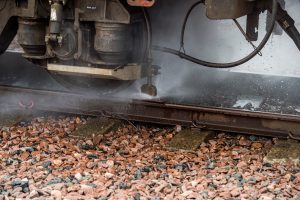 Scotland’s Railway is more prepared than ever before to keep trains moving during autumn.

Rail cleaning trains will treat 20,000 more miles of track than last year, more ‘Leaf Buster’ teams will be out on the network and small changes to the timetable will help make the service more reliable.

Ground-breaking microwave and cryogenic technologies will also be used for the very first time on Scotland’s Railway to help keep rails clean and customers safe.

Every autumn, the trees that grow along the railway drop thousands of tonnes of leaves onto the tracks and this debris can break down into a slippery surface that sticks to the rails and causes trains to lose their grip.

This can make trains overshoot signals and platforms – potentially putting customers and staff in danger. Debris can also affect signalling systems, making it hard to track where trains are on the network.

“We have teams of engineers out on the ground and our rail head treatment trains will also work around-the-clock cleaning rails and adding adhesives to improve train wheels’ grip.

“Since last autumn we have been working with experts to develop new microwave and cryogenic technologies that we are trialing for the first time this year and which will clear leaf mulch from the rails more effectively than ever before.

“We know few things annoy customers more than when their train is delayed because of leaves on the line, but the reality is that leaf debris can be dangerous – acting like black ice on the rail and leading to disruption.”

David Simpson, Operations Director for ScotRail, said: “We are working together with Network Rail to keep people moving during autumn.  Our teams will also be working through the night to clean train wheels of debris to help minimise the impact of autumn.

“We know that there is work to do to keep the network safe during autumn that’s why we’ve developed this plan to deliver a reliable service for our customers. It’s all part of our plan to build the best railway Scotland has ever had.”