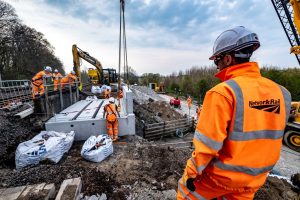 Passengers are being reminded that Network Rail engineers will be working from this Saturday (May 4) until mid-August to complete a multi-million-pound upgrade to track and signalling between Aberdeen and Inverurie.

From May 4 to August 19, the railway will undergo a series of closures to allow engineers to double the track between Dyce and Inverurie, carry-out bridge upgrades and deliver signalling enhancements.

The 15-week programme is part of the Scottish Government-funded Aberdeen-Inverness Improvement Project.

The following service alterations will be in place during the upgrade works:

May 4–June 14: Buses replace trains between Dyce and Inverurie.

Over the 15 weeks, engineers will lay 10 miles of rail over nearly 40,000 sleepers and replace or refurbish 19 bridges on the line.

The work builds on the closure of the line between May and August 2018 which saw the successful completion of the first phase of double-tracking between Aberdeen and Dyce.

The Aberdeen-Inverness Improvement Project will increase capacity on the route improving services into the two cities.

The benefits of the project for ScotRail customers include:

InterCity trains operating between Aberdeen and Inverness, providing an extra 1,400 each day between the two               cities.

A new direct service between Inverurie and Montrose, reducing the need to change in Aberdeen.

Billy McKay, Network Rail senior programme manager, said: “Double-tracking the line between Aberdeen and Inverurie will improve reliability on the route and allow a significant increase in the number of services available to customers.

“The Aberdeen-Inverness Improvement Project means more services and more seats for passengers and our engineers will be working around-the-clock to complete this complex programme as quickly as possible.

“We understand the inconvenience the work will cause to some passengers and residents, but such a huge engineering project cannot be delivered without the closure of the line. We are encouraging customers to leave extra time for travel, and plan journeys in advance.”

Derek Glasgow, ScotRail Aberdeen-Inverness project manager, said: “This is a significant project that will play a critical role in delivering a better service for our customers, as we continue to invest in Scotland’s Railway.

“We know that this level of engineering works will be an inconvenience, but we will do everything we can to keep customers moving with replacement bus services in place for the duration of the line closures.”