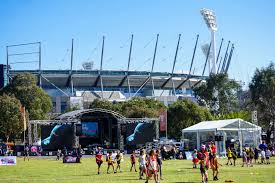 With just three more sleeps until Richmond take on the Greater Western Sydney Giants on football’s biggest stage, footy fans can soak up finals fever at this year’s AFL Footy Festival in Yarra Park, outside the home of footy, the MCG.

Minister for Tourism, Sport and Major Events Martin Pakula today joined AFL CEO Gillon McLachlan at the festival to encourage fans to come along, rub shoulders with their favourite footy heroes and enjoy family fun across the four-day celebration.

Other exciting Grand Final Week activities include MCG tours, the AFL Grand Final Parade, the Lifestyle Taste of Football, movies at the MCG, the Grand Final Eve Concert and the MILO Kids Zone.

The Andrews Labor Government is proud to play its part as well, partnering with the AFL on delivering these grand final celebrations and more so everyone gets a chance to be a part of it and enjoy one of the biggest events on the nation’s sporting calendar.

The Minister for Tourism, Sport and Major Events Martin Pakula said that there is no better week in Melbourne than AFL Grand Final week, with thousands of fans soaking up the atmosphere at our bars and restaurants and filling our hotels ahead of one of the biggest days on our sporting calendar. The AFL Footy Festival is the place to be over the next few days, leading into the Grand Final Friday public holiday where tens of thousands of fans will line the streets of Melbourne to get a glimpse of their heroes.

Melbourne is the sporting and events capital of the nation and Grand Final Week shows our city at its best, bringing together the best of footy, live music and entertainment right on the doorstep of the MCG.