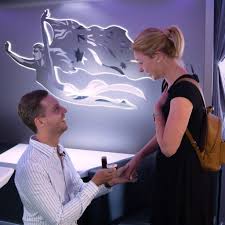 On its social media channels, the airline suggests a charming way for a lone takahē to meet a mate in order to encourage the population to grow: online dating. The lighthearted piece has a serious message at its core – New Zealand’s biodiversity is under major threat, and the airline, in partnership with DOC, has been involved with transporting threatened species to new homes since 2012.

Air New Zealand’s General Manager Global Brand and Content Marketing Jodi Williams says takahē are alluring, loyal animals and the airline wanted to play off this aspect of their personalities to raise awareness of the wider biodiversity crisis New Zealand is facing.

“The post is quirky but has seriousness at its heart – because while New Zealand is one of the richest areas of biodiversity on the planet, we also have one of the highest rates of threatened species. That’s why we’re working with DOC to support the release of native birds like takahē on the country’s Great Walks network, which are an iconic part of New Zealand’s tourism offering.

In 2018 Air New Zealand worked with DOC, iwi and other partners to put on a special charter flight that brought 18 takahē from the Burwood Takahē Centre near Te Anau to a new protected habitat in the Gouland Downs area of the Heaphy Track in Kahurangi National Park. This marked the first time a wild population of takahē had been established on mainland New Zealand in over 100 years.