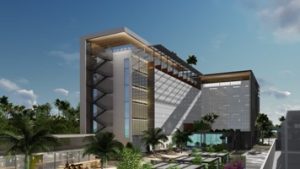 Aleph Hospitality announced the signing of a franchise agreement with Marriott International for the first Four Points by Sheraton hotel in Liberia. Located in the capital city, Monrovia, the hotel is due to become the first internationally branded hotel in the country upon opening in 2020 and will be managed by Aleph Hospitality under the Four Points by Sheraton brand.

The landmark property is ideally situated in the city’s central business district, adjacent to the United Nations mission and in close proximity to a number of government organisations and commercial offices. It will offer 111 stylishly appointed guest rooms to the capital’s expanding business traveller base, along with meeting facilities and a multitude of food and beverage outlets, including one all-day-dining venue, one speciality restaurant, a beach bar and grill and a rooftop bar.  Guests will also be able to take advantage of a gym, spa, swimming pool and access to the beach. The hotel will boast Four Points by Sheraton’s approachable design and excellent service and reflect the brand’s promise to provide what matters most to today’s independent travellers.

The opening of the hotel will play a vital role in helping to realise the country’s tourism strategy, which aims to deliver 15 million international visitors by 2023.

“With President Weah announcing plans just last month to greatly simplify the visa entry system and look to develop a national tourism board to drive inbound visitor numbers, Liberia looks set to significantly grow its share of voice in the African tourism industry,” commented Bani Haddad, Managing Director, Aleph Hospitality.  “The increasing number of international guests will bring with them a strong demand for international quality accommodation and we greatly look forward to managing the operations of the hotel to world-class standards and making the Four Points by Sheraton Monrovia the destination of choice in the city.”

Expected to create over 100 new jobs when open, the hotel, which is owned by Sea Suites Hotel LLC, will be operated by Aleph Hospitality under a third-party management model. This model, ubiquitous in the U.S. and European hotel industries but in its infancy in Africa, is proven to deliver superior value for the owner through a combination of the benefits afforded by an international brand married with a highly-focused and personalised management approach aligned to the interests of the owner.

“By appointing Aleph Hospitality to manage our hotel, we have secured not only one partner but two, with Aleph executing a franchise agreement for the Four Points brand which would not have been possible if we were managing the hotel ourselves,” said Joe Barbar, President of Sea Suites Hotel LLC. “We look forward to the hotel opening and creating history as the first internationally branded hotel in the country.”

Founded in 2015, Aleph Hospitality is an approved operator of all of the major international hotel brands and serves clients across Africa stretching from Monrovia to Mombasa.  Upcoming openings in addition to the Four Points by Sheraton Monrovia include, among others, the Best Western Plus Nairobi Westlands in Kenya, which is expected to open mid this year. The company also operates independent unbranded hotels such as the 115-room Getfam Hotel in Addis Ababa, offering owners the opportunity to tailor make the optimal management structure for their asset.