After American Airlines gets stuck, Delta steps in to fly 41 Oklahoma students 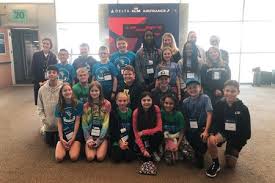 After American Airlines cancelled their flight to Virginia and Washington, D.C., Delta Air Lines stepped in to rescue a group of Oklahoma elementary school students who were left stranded at the airport.

Delta chartered a spare plane to take 41 fifth graders and their adult chaperones from James L. Dennis Elementary School in Oklahoma City to Virginia after they got stuck at Oklahoma City’s Will Rogers World Airport, Delta spokesperson Drake Castañeda said in a statement on Tuesday.

Not only was the Richmond flight special since Delta doesn’t have a regular route to the Virginia state capital, the group also got the entire aircraft to themselves.

One of the chaperones, Shantell Barbour, took to Twitter to thank the Delta agents for their help.

“Seeing people for who they are, and not just customers of one carrier or another, is what really made this story possible,” the statement read. “While we are in the travel business, we see ourselves as in the people business first and we couldn’t be happier that these students were able to make their trip.”

Castañeda added the heartwarming story is a testament to the company’s culture.

In a statement to the press on Tuesday, American Airlines spokesperson Ross Feinstein said the cancellation was due to weather.