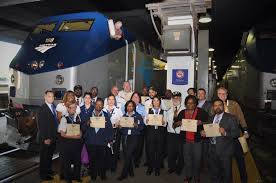 Amtrak today marked the 90th anniversary of the Empire Builder, which travels across the country’s northern tier, allowing customers to experience the grandeur of the Mississippi River Valley, Great Plains, Rockies and the Cascade Range. Daily service between Chicago and the Pacific Northwest provides a vital intercity travel option connecting more than 40 communities in eight states.

Sleeping car customers received wooden train whistles from Amtrak Guest Rewards and all customers departing Chicago received commemorative certificates signed by Amtrak President & CEO Richard Anderson. Prints of a new Empire Builder painting by railroad artist J. Craig Thorpe are available in the Amtrak store and for a limited time other items to recognize the anniversary of the service are also available from Amtrak.

Inaugurated by the Great Northern Railway (GN), the first westbound Empire Builder departed Chicago on the evening of June 10, 1929, but it was christened the next day in St. Paul, Minn., where the GN had its headquarters and where its mainline to Seattle began. The premier service was named for James J. Hill–the “Empire Builder,” who in the late 19th century founded what became the GN.

The GN and three railroads merged in 1970 to form the Burlington Northern, which continued to operate the Empire Builder until May 1, 1971, when newly-formed Amtrak took it over and changed the route to include Milwaukee by using what is now the Canadian Pacific Railway between Chicago and St. Paul. In October 1979, it became the first overnight train to be assigned bi-level Superliner® railcars, setting a higher travel standard that continues today.