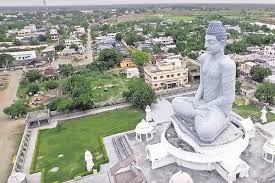 The Chief Minister N Chandrababu Naidu has said that Andhra Pradesh has vast potential for tourism development, and Amaravati would be developed as international tourist hub.

Delivering the valedictory programme address at the three day Amaravati Air Show 2018 at Punnamii Ghat here which concluded on Sunday, he said.

Regarding Amaravati, he said that it turned as a hub of international events. It was suitable for organising air shows and the Amaravati air show was successful providing eye feast to lakhs of people.

He said social media awards function was organised first, followed by Formula I H2O boat race in which Abu Dhabi bagged the award. Amaravati team also won award in the boat race, he noted, adding that efforts were on to get international recognition for Andhra Pradesh by conducting global events.

The Chief Minister said there was vast scope for tourism development in the State and once the tourism sector is developed, youth would get more employment opportunities. With the development of tourism sector, the hotel industry and service sector would also grow, he pointed out.