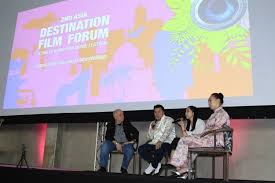 A one of its kind and intensive Asia Destination Film Forum was held in Bangkok recently.

It was a one-day event covering a wide array of fields like business, tourism, sustainability and cinema.

The first half of the forum featured top tourism professionals, who spoke about the importance of films for promoting destinations. Tanes Petsuwan, deputy governor, marketing communications, Tourism Authority of Thailand (TAT), spoke about Hollywood movies that have put Thailand on the international tourist map — James Bond 007, Bridge on the River Kwai and The Railway Man among others. He stressed the fact that many Bollywood movies shot in Thailand also helped popularize the destination and bring in a lot of Indian tourists to Thailand. He said that the TAT used a lot of visual media campaigns for their marketing initiatives.

Deepak Ohri, the Indian CEO of Bangkok’s top Leboa Hotel, said that his hotel did marketing campaigns with the producers of the Hollywood film Hangman 2, when the film was shot in his hotel. He said that the Hangman Suite, Hangman Tours, and even a martini drink known as the Hangman-Tini became very popular with tourists.

Former Thai tourism minister Weersak Kowsurat suggested at the forum that a film visa could even be issued for the many foreign films being shot in Thailand!

Huge boost has also been given to tourism in Vietnam, by the Hollywood film King Kong.
However, the negative aspects of tourism were mentioned too, caused by an excess of film shootings, and consequent excess of tourists. Once pristine destinations like Maya Beach in Thailand (which has now closed down) and Halong Bay in Vietnam, was also mentioned in this context.

Hence, “sustainability” comprised an important theme of the forum.