Atlantic hotel, Newquay evacuated all its guests after fire outbreak 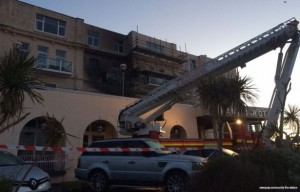 One of Newquay’s best-known hotels was evacuated this morning after a fire broke out in one of the rooms. Around 30 firefighters were called in after flames were seen emerging at around 3am.

The crews from Newquay were first on the scene, followed by fire engines and ladders from Perranporth, St Columb, St Dennis, Truro and St Austell. Firefighters confirmed the blaze was put out around two hours later.

The guests were taken to a nearby hotel. No casualties were reported. A spokesman for the Atlantic said the fire started in a balcony room and was caused by smoking. The hotel was re-opened for breakfast.