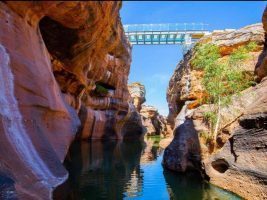 Australia’s first-ever glass bridge has been inaugurated at Cobbold Gorge in the Gulf Savannah region of north-west Queensland.

The gorge, which is on the private land, is around 900 metres long and in some places is only 2 metres wide- evidence that labelled in the state’s youngest gorge.

The 19 metres high bridge is located 60 km west of Forsayth. It provides visitors with a 360-degree view of the gorge.

Tourists have the opportunity to walk over the sandstone cliffs and look down to the waters below, spanning the width of the gorge, on the new bridge.

The glass bridge, made at a cost of $600,000, was unveiled on Saturday in front of 75 people with traditional ceremonies and a ribbon-cutting.

As per the operations manager Hudson Fox, this was the first time that there had been a bridge across the gorge and he hoped that this would enable people to experience its natural beauty with ease. He said that there were difficult spots for tourists where they struggled and the new bridge would make things easier for them.

Those, who were involved in the making of the bridge, had to face many logistical challenges in the project, but it took them only three days to install the bridge.

One of the hurdles that came in the way was that cranes could not be used in the construction of the bridge because of its location.

While the glass of the bottom layers is 45 metres thick, the side panels are 17.5 mm thick. The deck of the glass bridge is 9.5 metre in length and presents an exciting challenge for those who are scared of heights.

A lot of developmental work has been carried out on the Cobbold Gorge over the years including the first outback swim-up pool bar and their big infinity-edge pool.