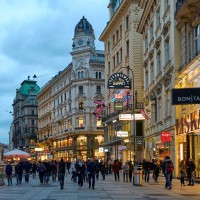 Austria as a travel destination has steadily been gaining popularity in the US. Since 2012 arrivals increased by 40.4%. Michael Gigl, Director of the Austrian Tourist Office USA & Australia knows the reason behind it: “ Austria offers the perfect combination of culture and nature, old and new paired with mouthwatering local cuisine and world-famous wines. It is the primary appeal of Austria as a destination, the essence of what the Austrian Tourist Office has been focusing on in its marketing efforts.”

Austria’s capital Vienna looks back at its best year ever: 15.5 milion bednights (+3.7%) and 7.1 million arrivals represent a new all-time high. The US is Vienna’s second best performing international market with a total of 380.000 arrivals. Even though Vienna is already gaining more popularity, the Vienna Tourist Board will be concentrating on sustainable and value adding growth in the coming years and also addressing local residents, whose positive attitude towards tourism is a tremendous asset for Vienna. In 2017, the Vienna Tourist Board carried out its most extensive survey to date, gauging the attitude towards tourism among Vienna’s residents. Results show that 96% of the Viennese have a positive and supportive attitude towards tourism, which is reflected in the hospitality and legendary “Gemuetlichkeit” of Austria’s capital.

Austria also benefits from an increase in convenient flight connections from the US. Austrian Airlines now serves 6 nonstop gateways to Vienna – established JFK and Newark, Washington DC, Chicago, and Miami, and its newest addition- Los Angeles. Additionally the Lufthansa Group offers great service from the US to Austria with convenient connections in Germany and Switzerland.

Michael Gigl is optimistic for the year ahead: “Early indications and expressed interest for 2018 are showing continued growth. While Austria’s Imperial Elegance is somewhat of a best seller, our guests from the US are also seeking deeper cultural experiences, a more immersive way of getting to know the country and its people. In 2018 we are celebrating 100 years of Viennese Modernism, a period that shaped the philosophy and spirit, architecture, and art of the early 20th century way beyond the borders of Austria. We are also celebrating 200 years of Silent Night, a simple song that to this day spreads the message of peace around the world, and was composed in a tiny village just outside of Salzburg on Christmas Eve in 1818.”