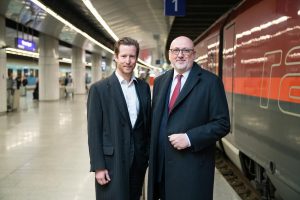 Austrian Airlines and the Austrian Federal Railways (ÖBB) launched the AIRail cooperation program in December 2014. The eight daily railway connections between Linz Central Railway Station and Vienna Airport were already expanded to 30 Railjet connections one year later. In 2017, the collaboration between the two national mobility providers was further extended to the route between Salzburg Central Railway Station and Vienna Airport. Up to 35 Railjet connections are available each day as AIRail with an Austrian Airlines codeshare flight number. The innovative intermodal transport concept, i.e. the combination of rail and flight connections, has emerged as a model for success in the meantime. This autumn Austrian Airlines and ÖBB already registered their 100,000th AIRail passenger.

“A responsible approach to dealing with the environment is particularly important for us as an airline. This also includes our aim of offering the option of travelling short distances by train. With our successful AIRail connections, we show that railways and airlines do not compete but that linking different means of transport ideally complement each other”, states Alexis von Hoensbroech, CEO of Austrian Airlines.

Andreas Matthä, CEO of ÖBB-Holding AG, adds: “The AIRail cooperation of Austrian Airlines and ÖBB is an outstanding success. 100,000 travelers have already used AIRail to combine rail travel with flights. Furthermore, this year about three million passengers have used the ÖBB Railjet to travel to and from Vienna Airport in an environmentally friendly manner.”

AIRail: Collect miles like on a flight, guaranteed onward connection and WLAN on the train

Thanks to the AIRail cooperation of Austrian Airlines and ÖBB, passengers combine train and flight service and thus benefit from a guaranteed onward connection, regardless of whether their journey continues by plane or train. Passengers can already check in at the Linz or Salzburg Central Railway Station and get their boarding passes. Moreover, Austrian Airlines passengers can also collect miles on AIRail trips with the Miles & More program.

Railjet passengers enjoy free WLAN during their journey as well as the digital entertainment offering of ÖBB. The possibility to reserve seats and snack vouchers round off the offering. Austrian Airlines Business Class passengers travel in first class on the trains and are given free access to the ÖBB lounges before leaving the central railways stations in either Linz or Salzburg.