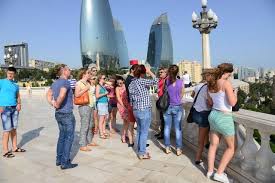 The rush of tourists to Azerbaijan created a new record as the government declared that over 2.4 million tourists from 191 countries visited the Caspian Sea coastal country in the initial nine months of 2019.

The number of foreigners and stateless persons coming to Azerbaijan within the period was somewhat over 2.41 million or 9.5 percent more than in the same time last year, as per the data compiled by the Azerbaijan’s State Statistics Committee.

From European Union, the number of tourists has increased by 24 percent compared to the same period of 2018, reaching 110,300 visitors.

In Azerbaijan, the tourism industry is experiencing an upward trend in the last years thanks to the development of the hospitality infrastructure and facilitation of visa issuing for international travelers. E-visa and urgent e-visa options permit travelers in getting their form of their online visa application within three days or upon the arrival, in the country’s airports.

Azerbaijan Tourism Board and the State Tourism Agency have rebranded the international tourism logo of Azerbaijan to restore the national tourism strategy of the country under the “Take Another Look” slogan. The main aim of the new strategy covers multiple activities and is anticipated to turn Azerbaijan into the most attractive and successful tourist destination in the Caucasus region. At the same time, the initiative is supposed to double tourism influx by 2023. The ultimate goal, however, is to turn Azerbaijan into one of the top tourist destinations worldwide for globetrotters.

Across five continents, the State Tourism Agency has been introducing global offices to assist Azerbaijan on the global tourism map as a safe, friendly and welcoming country known for its rich culture and unique historical heritage. Offices in Germany, the United Arab Emirates, Saudi Arabia, China, India, and Russia have already come online. The agency recently announced it would soon open four more offices in Great Britain, France, Iran, and South Korea.