Azerbaijan steadily becoming the major tourist center of the region 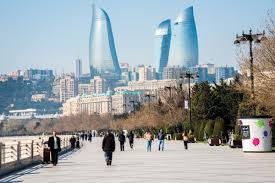 Azerbaijan is coming up steadily as the major tourist center of the region. Year by year, more and more tourists from various countries are opting for Azerbaijan as their holiday destination.

Azerbaijan was visited by 361,000 people in August, which is 13.2 percent more compared to August last year.

The Russians made up a major part (111,000 people) of these tourists. In addition, an increase of 82.2 percent was witnessed in the number of Iranian tourists. Their number amounted to 17,000 people.

The number of Georgian tourists visiting Azerbaijan in August was 11,000, marking a 20 percent increase year-on-year.

The number of tourists from Turkey, Central Asia and Southern Asia increased by 13, 50 and 11.55 percent, respectively.

From the Middle East, tourists from Saudi Arabia made up the major chunk of visitors from the region.

Due to successful international events held in Azerbaijan, the country has turned out to be a globally recognized tourist destination. Moreover, simplification of visa has played a major role in the development of tourism in Azerbaijan. Nowadays, citizens of a number of countries receive their visas right at the Azerbaijani airports, while other tourists can visit the country by getting online tourist visas.