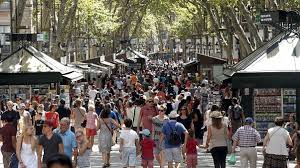 Can you really take in too much of a good thing?

This problem has become kind of a curse for Barcelona, one of Europe’s biggest tourist cities.

Approximately 20 million visitors come to Barcelona every year, in stark contrast to the population of the city of just 1.6 million.

Also, the rise in tourist numbers has caused a major drop in that resident population.

The residential population of the city centre has plunged 11% in the last four years. The amount of apartments being provided on rents to the holidaymakers has played a major contributing factor behind this issue. Barcelona City Council is all set to satisfy both sides of the debate, by endorsing the nonviolent coexistence of locals as well as tourists alike. Hiring local mediators is one of the ways used to resolve issues that arise between residents and tourist flat owners.

Mediators explain that some of the most common complaints are like loud noise from late night parties and untidy communal areas including lifts.

Even though this service has come into being for six months, 400 cases are already on the waiting list.

With summer tourist season by now in full swing, this number is only expected to rise.

Tags: 2015 due to rising tourist number