Beaches closed in France after hauls of cocaine wash ashore 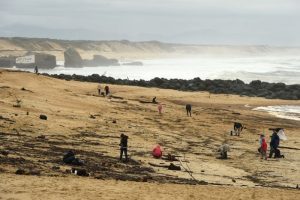 French authorities have closed beaches after kilos of pure cocaine found washed up on beaches in France. Beaches along the Atlantic coast have been closed as new tide delivers another haul of high-quality cocaine and other drugs.

Over 1000 kg of white powder, most of which have been found 83 per cent pure, has washed up in waterproof plastic packaging over recent weeks, along a 125 km stretch of the Atlantic shoreline.

The street value of the drugs has been pegged at €60 million. A 5kg parcel became the latest arrival on Tuesday, washing up on a beach on the western tip of Brittany. A 17-year-old was caught with the parcel. He had come from Toulouse, a three-hour drive.

Around a half-dozen, other beaches in the area have been closed. Police are stopping walkers for searching purpose and is also checking cars leaving nearby parking lots.

A police helicopter was also engaged in checking the 125-kilometre stretch between Cap Ferret and Soulac-Sur-Mer, including the Lacanau Beach.

The public prosecutor in Rennes, Philippe Astruc, has said that cocaine is washing ashore with each batch. Around 100 kilos is arriving each day all along the coast.

He said that intelligence surveillance has been set up by different services all along the French coast.

French investigators are collaborating with their European counterparts and the US Drug Enforcement Agency to check as to why drugs are washing up.

Several hypotheses have been cited but as of now, it is being believed that they were jettisoned due to a mechanical problem or a storm.

Earlier some packages were also found on the beach at Arcachon, southwest of Bordeaux. Some packages also washed up on Florida beaches during Hurricane Dorian in September.

Cops had seized a record of over 140 tons of cocaine across Europe in 2017.