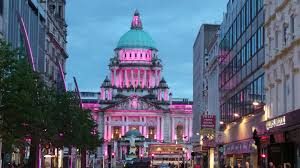 The new company has been set up to co-ordinate the provision and installation of design-led pods as tourist accommodation in unique and unexpected locations.

The Belfast start-up aims to establish up to 100 micro tourism joint venture partnerships throughout the UK and Ireland. It also has lofty ambitions to deploy 500 pods in hand-picked locations over the next five years, in partnership with landowners seeking to maximise the potential of their land through tourism.

The former founder of Habitat for Humanity Northern Ireland and CEO of further.space, Peter Farquarson hopes to take advantage of the growing tourism industry with his unique concept.

COO of further.space, and energy efficient housing entrepreneur, David Maxwell added that their research shows that landowners are attracted by the opportunity to diversify into tourism, however the process of establishing a tourism business on their land is often limited by financial or logistical impediments.

Further.space is the sister company of Intupod, who manufacture multi-purpose aluminium structured pods in Belfast. Further.space is the customer facing business that will establish a select network of joint venture business partners with landowners and existing tourism ventures in hand-picked locations.