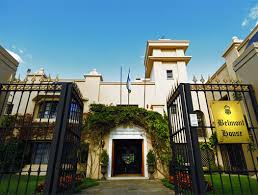 Down hotel has elevated its rating to four-star status and attracted an award for excellence from Tourism Northern Ireland following a £1million facelift.

Belmont House Hotel in Banbridge, which is run by Walter and Jane Russell, was upgraded when it unveiled an elegant new interior recently.

This refurbishment saw all eight en-suite rooms redesigned, while hospitality areas including its dining room and large function suite also got a revamp. The period features of the 19th century Georgian Linen House mansion have also been restored.

The Russell family, who also run Harry’s Bar in Banbridge, said the team at the hotel is “delighted” with its new status.

Walter Russell said that this revamp recognises all the hard work and investment they have committed to developing the Belmont House Hotel into the ideal venue for both the corporate and leisure market.

They are a family-run hotel with an exceptional team, some of whom have been with the Belmont House Hotel for over 30 years, so when it came to refurbishment, we had a personal investment to get it right. Mr Russell said plans for Northern Ireland’s first ever Game of Thrones exhibition, due to open in the town later this year, will see him look at further expansion to cater for demand.

Tourism Northern Ireland’s star rating scheme focuses on a range of areas, including the hospitality, cleanliness, standard of bedrooms, bathrooms and food. The number of stars awarded to a property following inspection indicates the standard visitors can expect and in the case of Belmont House Hotel, it has been rated “excellent”.

Belmont House Hotel was built in 1838 for Robert McClelland, owner of the Bann Weaving Factory. It then was owned by yachtsman William ‘Jumbo’ Anderson and changed hands again around 1930 when the Finney family moved in.

It has operated as a hotel for three decades, and in 2015 the Bonner family sold the business to the Russells for £1m.