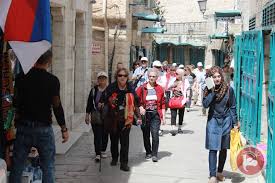 By the end of this year, the number of tourists and pilgrims who will visit Palestine will surpass the 2.8 million mark, as per the Minister of Tourism and Antiquities Rola Ma’aya’a.

She informed WAFA in an interview that there is a major growth in the number of tourists and pilgrims this year in comparison to the last year, emphasizing that the number has reached until now 2.7 million, observing that majority hotels are completely booked. She explained that she will take time to announce the final figures on December 24, Christmas Eve.

Ma’aya’a said she hopes that the number to increase even more in the coming new year, and that based on data provided by different hotels and tourist offices, bookings are constantly rising this year, which shows that the situation will be even better at year’s end.

As for the tourism situation in general, the minister said that tourism has enhanced in cities like Hebron, Bethlehem, Jericho and Ramallah, on the basis of the large number of tourists who pour into Palestine. In September, hotels in Bethlehem were full and the additional tourists were transferred to Hebron hotels, as well as Ramallah and even to Nablus.

She explained that at one time and at the time of the opening of a hotel, occupancy rate on its first day reached 67%, emphasizing that the number of tourist groups is large and the occupancy is high, which highlights that all the hotels in the country are busy.