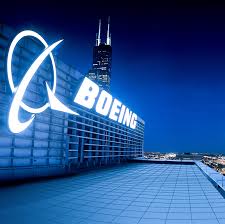 Boeing announced today that Anne Toulouse, senior vice president of Communications, has elected to step down from her role at year end and retire next year after 30 years with the company.

“Anne has been an outstanding leader and committed contributor to Boeing over her entire career,” said Muilenburg.  “I could not be more grateful for her dedication to this company, her One Boeing leadership style, and her strong commitment to investing in our people and culture.

“Above all, I also want to thank her for her tireless efforts as we worked through the challenges of the past year.  I understand her decision to retire and appreciate her commitment to ensuring a smooth transition.” Boeing expects to name a successor in the near future.

“Over the course of my Boeing career I have been fortunate to know and work with some of the most talented, principled, and impressive people anywhere,” Toulouse said, “This past year has been all-consuming and profoundly difficult for all of us at Boeing – albeit nowhere close to the experience of the families affected by the MAX accidents. As we look ahead, I am confident the hard lessons learned will make Boeing better and that we will deliver on our important commitments. As we move into that next phase, I can best serve the company by turning over the role to someone with fresh perspective and, therefore, made the difficult decision to retire.”

Toulouse, 61, became interim senior vice president of Communications, reporting to Dennis Muilenburg, Boeing’s President and CEO, in September 2018.  She served on the company’s Executive Council and took over the permanent communications role in February of 2019.

After joining the company in 1989 as a media relations manager at McDonnell Douglas, Toulouse advanced to lead Boeing’s global brand-building programs, helping position the company for growth in its second century.  Over her career, she was responsible for the company’s brand strategy, global advertising, sponsorships, the Boeing Store, the in-house creative team, historical archives and corporate identity. She led a large-scale, multi-channel initiative to observe the company’s centennial anniversary in 2016. She also served as vice president for Employee Communications, Business Operations and Corporate Identity and Advertising.

Boeing is the world’s largest aerospace company and leading provider of commercial airplanes, defense, space and security systems, and global services. As the top U.S. exporter, the company supports commercial and government customers in more than 150 countries. Boeing employs more than 150,000 people worldwide and leverages the talents of a global supplier base. Building on a legacy of aerospace leadership, Boeing continues to lead in technology and innovation, deliver for its customers and invest in its people and future growth.