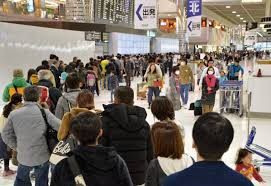 The new departure tax is valid to those exiting Japan either by airplane or ship, as infants below two years age and those transiting within 24 hours are excused.

In April last year, the tax follows legislation was passed and is targeted at creating new revenue streams that will facilitate in improving travel services, along with providing travelers with good access to information in terms of traveling in Japan to enhance visitors’ satisfaction and encourage tourism, particularly to rural areas.

Also, the departure tax will be imposed on building facilities and infrastructure to cope with the rising tourist numbers anticipated to visit Japan in the run up to and after the Olympic and Paralympic Games to be organized in Tokyo in 2020, government officials have said.

Government officials in Tokyo have stated that the income from the new tax will be around 6 billion yen (55.26 million U.S. dollars) between January and March 2019, and previous legislation had been passed to make sure all revenue generated is distributed for tourism related projects.

Revenue in fiscal 2019, in the meantime, is anticipated to hit the 50 billion yen mark, the government has calculated, with the funds to be utilized for tourism projects and infrastructure, comprising facial recognition technology at gates in air and seaports.

Japan, while relishing an economic uptick, is still mired in deflationary pressure and has been more and more looking towards tourism to perk up its economy.

The number of tourists, mainly from the neighboring countries in Japan, has risen significantly, partially due to relaxed visa regulations and a moderately weak yen bolstering the purchasing power of inbound visitors.