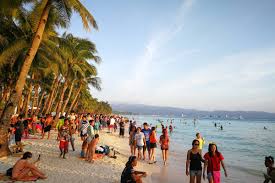 Philippines’s most charismatic beach destination, Boracay Island in the first three months of 2019 has attracted 619,934 tourists. According to the Malay Municipal Tourism Office, this increase in numbers of visitors at Boracay visitors from January 1 to April 15, 2019 is boosting its tourism industry.

This tourism figure also shows that some 67,000 visitors more than the 553,074 tourists who visited the island around the same time in 2018.

From April 1 to April 15, the Malay Municipal Tourism Office shows about 107,218 tourists. Of the figure, the international tourists accounted for 44% or 47,450 arrivals.

The majority of foreign visitors are from China and Korea, accounting for 80% of the total number of foreigners visiting the island. Most of the foreign tourists hail from the United States, Taiwan, Russia, Japan, and the United Kingdom.

The government of Philippines is upgrading its popular beach destination Boracay Island to welcome more international tourists and to address environmental and infrastructure issues.

Boracay Island reopened to all the tourists on October 26, 2018 after it was closed for 6 months, by order of President Rodrigo Duterte who called the tourism hot spot a “cesspool.”

In part due to cruise ship arrivals, Boracay Island has seen a major increase in the number of tourists in recent years. In the year 2018, Boracay Island welcomed about 941,068 tourists. In 2017, before the closure of the island for the environmental cleansing, the island drew two million tourists.