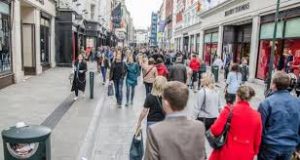 Tourism Ireland has stated that the current effect of Brexit-led “consumer concern” is creating an effect on the number of visitors to the country.

It said that visitor numbers have shown a “modest” increase for the initial seven months of 2019 but a slight fall in July.

For the Irish tourism industry, areas of concern comprises the discontinuation of Norwegian Airlines flights from North America to Ireland, along with the deferral of some Chinese flights, with ongoing uncertainty regarding Brexit and the weak value of Sterling.
On July 2019, the total number of trips to Ireland dropped by 0.5% to 1,155,100.

Trips by residents of Britain increased somewhat as trips from the US and Canada dropped by 2.7% and from other parts of Europe, besides Britain, was down by 0.7%.

“The fall in the value of sterling has made holidays here more expensive for British visitors, and has made Britain more affordable for visitors from many of our top markets.”
“The figures for January to July indicate a very mixed picture,” Mr Gibbons said, emphasizing the “modest performance and some continuing underlying weakness” from Britain and mainland Europe.