Bringing the Sound of Bird Song to London Bridge Station 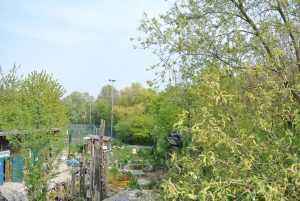 Sounds from an ecological park will be streamed to London Bridge Station, the UK’s fourth busiest railway station, thanks to a new work created by artist collective Soundcamp and artist Jessie Brennan.

A live audio stream is being transmitted from Stave Hill Ecological Park, in Rotherhithe to an array of speakers inside the station entrance at the junction of St Thomas and Bermondsey Street.

Called Sounds Interrupted the installation forms part of Soundcamp 2019 and will run until Friday, 10 May, including the weekend of International Dawn Chorus Day, which covers 4 and 5 of May.

As well as the sound of birdsong the audio stream will also capture people playing sports, dogs being walked, overflying aircraft and passers-by, reflecting the density of the urban setting and the layering of its soundscape.

Ian Hanson, route stations director, Network Rail said: “As part of the Thameslink Programme redevelopment of London Bridge station we have been able to host a number of exciting and imaginative art installations. Sounds Interrupted is the latest of these.

“The new station is a vibrant place at the heart of a busy residential and business community. Public art works add to that vibrancy and make stations more than simply a place where people rush through. I’m sure people will find the sound of bird song quite soothing,” said Ian.

The density and variety of birdsong in spring reveals the biodiversity of what can be considered the UK’s first urban ecology park, created some 30 years ago on rubble infill into former wet docks.

Grant Smith of Soundcamp said: “This project creates a link with Stave Hill Ecological Park in Rotherhithe by playing an intermittent live stream of sounds at London Bridge station from an array of re-used speakers close to the station reception.

“As people travel through this important transit hub, they may hear segments of birdsong, sounds of people working or passing by further east along the river.”

Grant added: “Sounds Interrupted celebrates the UK’s oldest urban ecology park, created on rubble infill into abandoned docks in 1987 as the successor to the William Curtis Ecology Park by Tower Bridge, not far from the present installation.

“The live stream points to this less known thread of experimentation in north Southwark, which in many ways has been a pioneer of community-based ecology in the city.”

Artist Jessie Brennan said: “Sounds Interrupted transposes live sounds from Stave Hill Ecological Park to London Bridge station – a location very close to the original site of the park which was formerly the William Curtis Ecology Park at Tower Bridge. Stave Hill Ecological Park is the successor to the William Curtis and was established by locally based community activism to safeguard public land, in response to urban development in that area during the late 1980s.

“The live audio stream can be seen, or rather heard, as a gesture towards its productive political use, expanding the geographical bounds of the ecological park’s public urban green space by returning its sounds (close) to the original site.

“We chose the Reception area of London Bridge station, in part, because we hope the sound installation might be encountered by station staff passing through the area as they sign in for their daily duties,” she added.

The dawn chorus is the subject of a public art project over six years by Soundcamp, who organise a global network of listening points and produce Reveil: a 24-hour radio broadcast over that weekend, coordinated from Stave Hill Ecological Park.

Soundcamp 2019 is a weekend of free workshops, talks, walks, and other activities exploring the urban environment.