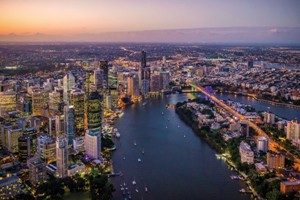 Lord Mayor Adrian Schrinner has announced Brisbane will receive an economic boost of over $112 million through new business events set to take place in the city over the coming years.

The forecast boost is an annual record achieved by the city’s economic development board Brisbane Marketing with partners including the Brisbane Convention & Exhibition Centre (BCEC).

Cr Schrinner said the conferences, meetings and incentives secured for Brisbane would have significant economic flow on effects for the city.

“In the year to July, Brisbane Marketing and partners secured 91 business events worth $112.2m for Brisbane – a jump of almost 20% compared to a year ago,” Cr Schrinner said.

“As these events take place, Brisbane will welcome over 47,600 industry experts, thought leaders and delegates to our city over a combined 185,200 days.

“Through the Lord Mayor’s Convention Trailblazer Grant Program, we are enlisting emerging research and industry leaders to help advocate for conferences to consider Brisbane for the first time,” Cr Schrinner said.

A wave of new tourism-related infrastructure has also supported Brisbane’s strategy to secure more lucrative incentive travel business, with more than $13m worth of incentive wins over the past year.

“In addition, strategic partnerships with government, industry and venues such as the world-class BCEC have proved critical to presenting competitive bids against other cities vying for these conferences and business events.”

BCEC General Manager, Bob O’Keeffe said a collaborative and united Team Brisbane approach had delivered an outstanding result for the city, offering many opportunities for investment, and research and development in Queensland’s key sector industries.

“BCEC has experienced its best year ever, hosting a record number of conventions contributing some $300 million, as a result of convention business, to the Brisbane and Queensland economies,” Mr O’Keefe said.