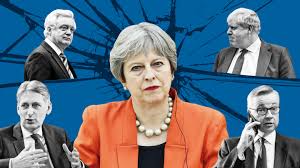 Britain is experiencing political turmoil as decisions about the country’s future – or not – in the European Union brought with it a lot of ministerial resignations. Amid deep opposition, the country’s Prime Minister Theresa May is facing a possible vote of no confidence, which would at least trigger a leadership contest in the ruling Conservative Party, if not a potential General Election if the coalition government begins to break up.

Last week, four ministers resigned over the Brexit issue, with May telling parliament in a speech on the matter, “Voting against a deal would take us all back to square one.” It took almost two years of fraught negotiations between the European Union and the United Kingdom to come to a deal on Britain’s exit from the bloc; after a referendum in June 2016.

Britain will formally exit the EU on Friday, March 29, 2019, at which point it will cease to be involved at any level in EU decision-making.

However, under the draft agreement, the UK will stay inside the bloc’s single market and remain subject to EU laws and regulations until the end of December 2020, during which time, the two sides would attempt to sort out a new trade relationship.

During this period, all existing EU “regulatory, budgetary, supervisory, judiciary and enforcement instruments and structures” will continue to apply within the UK, including rulings made in the Court of Justice of the EU.