British tourist topples over into sea in Thailand 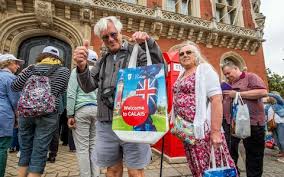 Media reports stated that a British traveller has reportedly been missing for two nights after falling overboard into the sea during a sightseeing trip in Thailand.

Wesley Bates, 35, who holds dual nationality of Britain and Australia, fell into the sea off Koh Samui during an “inebriated” speedboat trip on Monday, according to news reports. Chaktam Jaijong, the captain of the vessel, claims the group that charted the boat – four men and one woman – ignored warnings not sit on the bow without life jackets.

Mr Jaijong said the group were already drunk when he picked them up for the tour and Mr Bates lost his balance during windy weather and fell into the water as they made their way back to the island at around 4pm. He added: “They didn’t listen to me when I told them to sit properly because it was very dangerous to sit on the boat’s head.

“They looked very angry, so I didn’t want to keep bothering them, so I just let them sit there.” Mr Jaijong was aided by local fishermen in searching for Mr Bates before the authorities were notified and the search continued without success.

Police Major Worasak Akarakul, the inspector of Koh Samui police station, said despite all efforts Mr Bates had still not been found.