Home » Bucharest has highest potential for development in Europe

Bucharest has highest potential for development in Europe 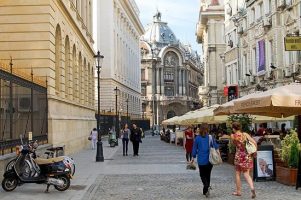 Bucharest remains the European tourist destination with the highest potential for development for the second consecutive year as per the study named “Global Mastercard Index of Urban Destinations 2019”.

The study offers analysis if urban tourism and the behaviour of tourists from the past ten years.

There have been major social changes and technological advancements mainly concerning with people’s desire to travel around the world, visit and learn about other cultures.

The study quantifies this desire since 2009 and approves the fact that the number of tourists who have used accommodation services has increased by 76 per cent.

The Country Manager of Mastercard Romania, Cosmin Vladimirescu, said that the study also highlighted a broad perspective of the tourists’ behaviour, offering the opportunity to understand their needs and experiences they were seeking.

As per the study, Bucharest records the development potential of 10.3 per cent amongst all cities in Europe. The study also says that 1.4 million resorted to accommodation services last year and the average value spent per day reached USD 105, compared to the previous year, when this amount was USD 200.

200 cities have been included this year in the Global Mastercard Index of Urban Destinations study, all of which have been selected as per the volume of tourists and their expenses in 2018. The study also highlights the growth forecasts for 2019, as well as information on the average length of stay and the amount spent per day by tourists.

The study has also revealed that Bangkok remains the most visited city in the world, with over 22 million tourists having used accommodation services.

Paris and London have grabbed second and third position respectively, exceeding 19 million tourists. In 2018, the top 10 cities registered a greater number of tourists than the previous year. The 2019 forecast provided by the study indicates a general increase, especially for Tokyo, the city where the largest increase in the number of accommodated tourist is expected.

Dubai has topped the list so far as tourists spend is concerned. Tourists spend an average of USD 553 per day there.