UP budget pushes for religious tourism 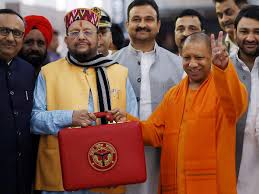 The government of Uttar Pradesh has kept Rs. 500 crore aside for an airport in Ayodhya and Rs. 200 crore for the purpose of beautification of Kashi Vishwanath temple of Varanasi in its 2020-21 budget tabled on Tuesday in the state assembly. The main aim is to set up Ayodhya and Varanasi as major tourist hubs. Just after the Union government announced a 15-member Shri Ram Janmabhoomi Teerth Kshetra Trust to help the building of the Ram temple in Ayodhya, the state government made a special provision of Rs. 500 crore for the construction of the airport that would recover the connectivity system expecting a bigger rush of pilgrims in future.

Also, the state government has recently proposed to spend almost Rs. 85 crore on the growth and expansion of high-class up market infrastructure in the pilgrim city. Prime Minister, Mr. Narendra Modi’s constituency Varanasi has received quite an attention as well. Besides the well-known Kashi Vishwanath temple, `170 crore has been made for the establishment of a cultural centre in the same.

Similarly, for the development of water sports at the famous Ramgarh Tal in Gorakhpur, the domain of UP CM Yogi Adityanath, got Rs. 25 crore, It has been beautified as a key tourist attraction in the last three years. In addition, the state budget also has the provision of the development of 46 major tourist destinations across the state.

This is the fourth for Yogi Adityanath’s government and the state’s largest-ever annual budget to the tune of Rs 5.12 trillion. This is almost 6 per cent higher than the earlier budget of `4.79 trillion. The state has distributed `300 crore and `210 crore for the socio-economic development of the backward regions of Purvanchal (Eastern UP) and Bundelkhand respectively.

As the state government is determined to set up a state Niti Ayog, it has also taken steps of setting up ‘Yuva Hubs’ in 75 districts .