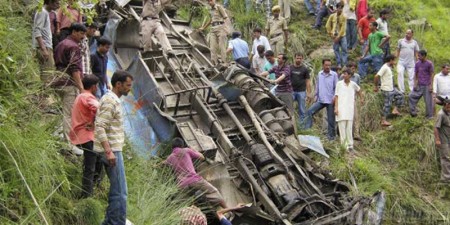 A bus carrying 34 people in Maharashtra in India that was travelling to Mahabaleshwar plunged a deep gorge off Ambenali Ghat in Raigad district on Saturday.

Only one person, Prakash Sawant Desai, survived as he jumped out of the bus, said police inspector Balkrushna Jadhav of Raigad police.

The accident took place near Poladpur, around 200 km from Mumbai, according to state highway traffic officials.

Police said the passengers were from Dr. Balasaheb Sawant Konkan Krishi Vidyapeeth, an agricultural university at Dapoli in Ratnagiri district, and were going on a picnic to Mahabaleshwar. As they were crossing a sharp turn at Poladpur around 11.30 am, the driver lost control and the bus fell into the gorge.

Local rescuers, policemen from Poladpur station have rushed to the spot for rescue operations. A National Disaster Response Force team from Pune has been called in.

Prime Minister Narendra Modi expressed grief at the death and offered condolencesto the kin of the deceased.

Congress president Rahul Gandhi also expressed pain over the incident and asked party workers in the area to “provide all possible assistance to the injured and families of those who have died”.