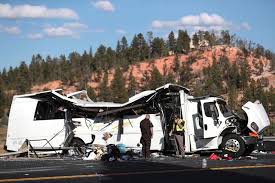 At least four people have been killed and another 12 injured when a bus carrying Chinese-speaking tourists careened off a road and crashed near Bryce Canyon National Park in Utah on Friday, authorities reported.

The crash occurred at about 11.30am on State Route 12 just west of the park.

A total of 30 people, including the driver, were aboard the bus when it ran off the road, rolled into a guard rail and flipped onto its side,sheriff’s spokeswoman Denise Dastrup said.

All 26 people aboard who survived were injured, and were taken to various hospitals with injuries ranging from minor to life-threatening, she said.

The Highway Patrol said that 12 to 15 people on the bus were critically injured. Seven victims were initially listed as critical, and four of them were evacuated to hospitals by helicopter, Dastrup said.

At the time of the crash, Dastrup said, the bus was headed toward Bryce Canyon, located about 435km south of Salt Lake City, and skies were clear.

The passengers were all Mandarin Chinese speakers, and that countyofficials put out a call for Mandarin speakers to go one of the local hospitals to assist in translation. The victims’ nationalities had not been immediately determined, officials said.

The cause of the crash was under investigation, but weather did not appear to be a factor, state Highway Patrol and Garfield County Sheriff’s Department officials said.

The national park, occupying 14,245 hectares of southern Utah, is best known for its giant, spired, multi-hued rock formations, or oodoos, and attracts some 2 million visitors a year.