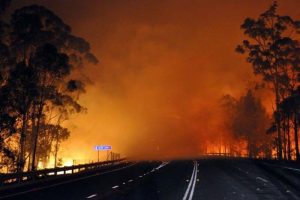 The bushfire is likely to take more areas into its grip due to strong westerly winds with gusts of up to 90 km/h in parts.

A bushfire burning on NSW’s South Coast has reached an emergency level as it has crossed the Princes Highway, cutting off several NSW towns, as almost 130 fires burn across NSW amid dry and windy conditions on Monday.

The Currowan blaze, which has already burnt over 11,500 hectares, is burning out-of-control in the Bimberamala and Murramarang national parks.

The Currowan fire has become doubled in size after being whipped up by westerly winds, and is moving forward in an easterly direction towards the coast.

The Rural Fire Service (RFS) said early on Monday morning that the road between Termeil and the Kings Highway has been closed due to spot fires, which has crossed over the Princes Highway and result into cutting access to coastal communities in the area.

Meanwhile, an emergency warning issued late on Sunday remains in place on Monday, with residents between Kiola and North Durras being told to take shelter after the highway closure meant it was too late to leave.

The RFS had earlier asked residents in the coastal communities of Durras, Pebbly Beach, Depot Beach, Pretty Beach and Bawley Point to leave their respective areas either north towards Ulladulla or south towards Batemans Bay. It is now too late to evacuate those areas.

While an evacuation centre has been set up at Ulladulla Civic Centre, another one is going to be opened in Batemans Bay.

Smoke from fires is harming large areas of NSW, including the Sydney area. The smoke is getting spread due to westerly winds from fires in the Hawkesbury, Blue Mountains and Wollondilly areas.