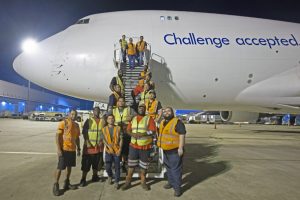 “We have found that Bush Airport market and surrounding area, with its focus on the oil and gas industry, auto parts, medical equipment as well as the high-tech industry, aligns with our group strategy,” said Offer Gilboa, CAL Cargo Airlines Chairman. “By adding Bush Airport to our current state-side network of highly desirable locations — including JFK International in New York and Hartsfield-Jackson in Atlanta — we will greatly benefit our expansion efforts in the U.S. We are also excited to offer greater connectivity via our main hub, located in Liege. Through our global network which includes Ben Gurion Airport, Larnaca International Airport as well as Oslo Airport we can provide immediate accessibility to all of Europe, Africa and the Middle East.”

This is the latest step in the continued growth of the cargo operations at George Bush Intercontinental Airport. In 2018, Bush Airport for the first time saw more than 500,000 metric tons of cargo moved through the operation.