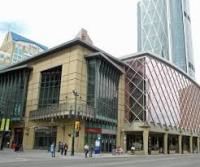 The Telus Convention Centre in downtown Calgary has been transformed into an emergency shelter to aid the city’s most vulnerable during the COVID-19 or coronavirus pandemic.The city had originally planned to house the homeless in hotels and motels, but the idea was scrapped by the provincial government. Rajan Sawhney, minister of community and social services, said retrofitting those rooms was time-consuming and a more immediate solution was needed.

Sawhney said many changes had to be made for suicide prevention.

She said that some of these individual would have significant mental-health issues or addictions, so the retrofits included removing the curtains or anything that had strings, light fixtures that had chains, removing any lamps, putting cages around sprinkler systems, enclosing the thermostat.

The Telus Convention Centre was a faster option to support Calgary Drop-In Centre clients while adhering to physical distancing guidelines, the minister said. The new space can house a maximum of 350 people and will only serve clients who have not tested positive for COVID-19 or show associated symptoms.

Sandra Clarkson, executive director of the Calgary Drop-In Centre, said the temporary facility — in addition to the organization’s main building and an emergency overflow site in the northwest — should be enough space to accommodate clients, which can be upwards of 800 people per night.

She said Drop-In Centre employees will conduct screenings for COVID-19 symptoms before moving clients to the temporary shelter, which is estimated to stay open for two months. At the facility, increased cleaning, disinfecting and hygiene protocols will be in place and clients will be continually monitored for symptoms.

Sawhney said using the centre comes at an equal or slightly higher cost than hotels but she couldn’t provide a number. She said the money will come from the $25 million earmarked by the province to aid the homeless.

There is, however, one inn in Calgary currently undergoing changes to house vulnerable people who have tested positive for COVID-19 or who are experiencing symptoms, said Sawhney. It will house a maximum of 120 people and is expected to open in the next few days.

Just shy of two weeks ago, Calgary announced it would open hotel and motel rooms to reduce the risk of COVID-19 spreading in overcrowded shelters. Some organizations did move people into hotels but Mayor Naheed Nenshi said Friday that further plans were halted by the United Conservative government.